Let us introduce ourselves 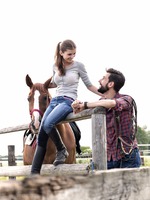 A friend bred paints and I leased her for the foal, so I'm not positive on that. hehehehe foal legs are always so hilariously long He looks like he's teetering around on stilts. And she tends to throw solid color babies anyway. Not a common cross, but it was very deliberate with experienced breeder input to get the characteristics I was looking for. ☺️ If Dad is solid and Mom is Overo , baby has a 50% shot of getting white Interesting. It's been a long wait for him to get here, and I can't wait to see how he develops. ALTHOUGH if baby turns out to be true black you know she is at least homozygous at the agouti gene!). Odd that his Mom is so colorful & he looks like he doesn't have a white hair on him. That's what I meant by getting white, I didn't phrase it well. Much like flipping a coin, you don't get to that 50% heads until you've done lots of flips though! I wasn't half as concerned with what his color would be as what his build would look like.

So you could get quite a variety of colors and patterns out of her depending on who you breed to. Only one has come out with any color, so going in, I wasn't quite sure what to expect since she hasn't had many.

I'm honestly not a huge fan of paints unless there's very little white on the face. I think he's gonna shed out black, but we shall see. This will be her third foal. The extension and agouti genes work together to determine chestnut, bay, or black base coat. I'm keeping my fingers crossed for black, that would be amazing, but I don't think I'll know for sure until he sheds out the baby coat. As long as he's sound, and conformationally strong, the color doesn't matter so much. The mare's last two foals have both been sorrel, one solid, one paint. When we did the genetics with the breeders they said it was 50/50 black or brown and then either solid or overo with one of those two colors. It still exists in the breed but they are trying to get rid of it. Please post more pics as the little one grows up He's so lovely!

Bute long term though, definitely has the potential to cause kidney damage, gastrointestinal ulceration, and right dorsal colitis. I don't have personal experience using it for arthritis, but my horse was on it for 6 weeks following a ligament injury. My vets have always recommended Banamine for short term issues and Previcox for long term.

Most of the vets in my area dispense Previcox instead of Equioxx to lower the cost.

Thanks for any suggestions Equioxx is supposed to be much easier on a horse's digestive tract and less likely than bute to cause ulcers. Bute is not an ideal long term option for pain management. Bute is generally not recommended for long term use, i. e. Currently I have my horse on vet prescribed bute, 1/2 tab 2x a day AM/PM, but I have access to Previcox/Equioxx. In general, if it's going to be a long term thing then firocoxib is typically considered to be the safer choice. Owner put her on Previcox and she was feeling so good in a couple days she cantered up for breakfast. Previcox is just as effective as Equioxx and is a bit cheaper. He developed ulcers anyway, though he had a number of other stressful factors at play including a barn move.